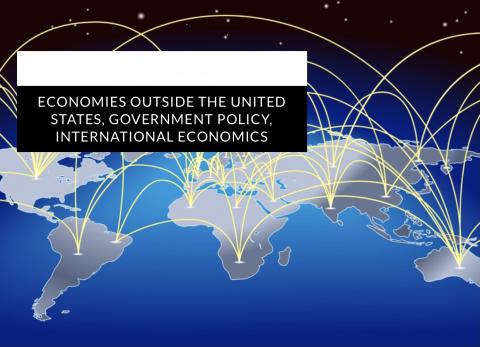 The noneconomic views of trade all seem to stem from a common root: the tendency for human beings to emphasize tribal rivalries. For most people, viewing trade as a rivalry is as instinctive as rooting for their national team in Olympic basketball.

To economists, Olympic basketball is notan appropriate analogy for international trade. Instead, we see international trade as analogous to a production technique. Opening up to trade is equivalent to adopting a more efficient technology. International trade enhances efficiency by allocating resources to increase the amount produced for a given level of effort. Classical liberals, such as Richard Cobden, believed that free trade could bring about world peace by substituting commercial relationships among individuals for competitive relationships between states.

To produce the wine in Portugal, might require only the labour of 80 men for one year, and to produce the cloth in the same country, might require the labour of 90 men for the same time. It would therefore be advantageous for her to export wine in exchange for cloth. This exchange might even take place, notwithstanding that the commodity imported by Portugal could be produced there with less labour than in England.

The opportunity to trade with the painter enables the surgeon to paint her house by doing a few hours of surgery. Similarly, international trade enables one country to obtain cloth more cheaply by specializing in the production of wine and trading for cloth, rather than producing both goods for itself.

What determines the pattern of specialization and trade? In the 1920s, Eli Heckscher and Bertil Ohlin offered one theory, called the factor proportions model. The idea is that a country with a high ratio of labor to capital will tend to export goods that are labor-intensive, and vice versa.

The Ricardo and Heckscher-Ohlin theories tend to predict clear patterns of specialization in trade. A country will focus on one type of industry for exports and another type of industry for imports. In fact, the types of industries in which a country exports and the types in which it imports are not dramatically different. This fact has led to the emphasis on another theory of trade, developed by Paul Krugman and others. The idea is that patterns of specialization develop almost by accident and that these patterns persist because of positive feedback. This is known as the increasing-returns model of international trade. “Increasing returns” means that the more of something you produce, the more efficient you get at producing it.

In the United States, for example, Detroit became an automobile-manufacturing center. Once the first large automaker located in Detroit, it was natural that other auto companies would be started there because it was easier to find employees with the right skills. Likewise, people with the skills to produce movies were first located in Hollywood. It became uneconomical to try to build an auto plant in Hollywood or a movie studio in Detroit. Thus, Detroit became an exporter of automobiles, and Hollywood became an exporter of movies. The same model of efficiency explains the international arena—why, for example, the Swiss specialize in watches and the Japanese in portable music players.

All of the economic theories of international trade suggest that it enhances efficiency. In this regard, international trade is like a new technology. It adds to the productive capacity of all countries that engage in trade. Some of the efficiency is due to comparative advantage, as in the Ricardo and Heckscher-Ohlin theories. In addition, some efficiency comes from taking advantage of increasing returns.

Another benefit from trade is that it promotes dynamism and innovation within an economy. Improvements in manufacturing quality and productivity in the United States in recent decades have been credited, in part, to the pressure of competition from Japan and elsewhere.

An economy that is closed to trade is one in which inefficient industries and laggard firms are well protected. In fact, studies suggest that barriers to trade are a major cause of extreme underdevelopment. The countries that are most closed to trade tend to be the poorest in the world. Countries that have reduced trade barriers and increased the share of imports and exports in their economies tend to be among the fastest-growing nations.

According to a World Bank study, twenty-four developing countries that became more integrated into the world economy in the 1980s and 1990s had higher income growth, longer life expectancy, and better schooling. Per capita income in these countries, home to half the world’s population, grew by an average of 5 percent in the 1990s compared with only 2 percent in rich countries. China, India, Hungary, and Mexico are among the countries that adopted policies that allowed their people to take advantage of global markets. As a result, they sharply increased the amount of their GDP accounted for by trade. Real wages in these countries rose and the number of poor people fell.

The study also points out that two billion people—particularly in sub-Saharan Africa, the Middle East, and the former Soviet Union—are in countries being left behind. These countries’ integration into the world economy has not increased, and their ratio of trade to GDP has stagnated or fallen. Their economies have generally contracted, poverty has increased, and education levels have risen less rapidly than in the more globalized countries.

Another report notes that exports plus imports as a share of output among the richest countries rose from 32.3 percent to 37.9 percent between 1990 and 2001. Moreover, among developing countries, that share rose from 33.8 percent to 48.9 percent over that period. The success of India and China recently, and Japan, Taiwan, South Korea, and other countries in the 1970s and 1980s, is due in large part to trade.

If goods were perfectly tradable across borders, with no trade barriers or transactions costs, then there would be no reason for prices to differ. This gives rise to the idea of purchasing power parity, a theory of exchange-rate adjustment based on the law of one price.

If the same good sells for one hundred dollars in the United States and one hundred euros in Europe, then according to the law of one price the exchange rate between dollars and euros ought to be one. The theory of purchasing power parity is that this relationship holds for an overall market basket of goods and services.

Empirical tests tend to show only a weak tendency for exchange rates to move in the direction of purchasing power parity. This means that cross-border trade is not nearly friction free. The failure of purchasing power parity to hold, except perhaps in the long run, indicates that transportation costs, language-translation costs, and other factors limit the integration of global markets.

Capital Flows and the Balance of Trade

In 2000, U.S. exports were $1.1 trillion and U.S. imports were close to $1.5 trillion. The excess of imports over exports is called a current account deficit. What caused this deficit? Modern economists believe that the trade surplus and capital flows are mutually determined. When a nation’s domestic saving (personal saving plus retained earnings of corporations) exceeds the domestic uses of saving (financing its private investment and its government budget deficit), then that nation will run a trade surplus, and vice versa.

To obtain a Japanese car without trading goods and services, the Japanese have to accept financial assets in exchange for cars. These assets could be dollars, shares of U.S. companies, corporate bonds or other private debt instruments, or U.S. government debt. A country that is accumulating foreign assets will necessarily run a trade surplus. A country that is selling assets to foreigners will necessarily run a trade deficit. A country will accumulate assets when its domestic saving is greater than its domestic uses of saving. A country will sell assets when its national saving is insufficient for its domestic uses of saving.

Typically, one would expect wealthy countries to have excess saving and to invest in capital-poor countries. From this perspective, it is an anomaly that the United States is a capital importer and China is a capital exporter. However, the United States is a relatively attractive country in which to invest, and American policies tend to encourage consumption rather than saving.

Economic theory indicates that international trade raises the standard of living. A comparison between the performance of open and closed economies confirms that the benefits of trade in practice are significant